If you live under a rock, are new to the area, and/or new to craft beer, wine, or cider in Loudoun perhaps then you can be forgiven for not having heard of Corcoran.  The Corcoran family began by opening Loundoun County’s 11th vineyard to the public in 2004 and the beer followed 7 years later.

According to brewmaster Kevin Bills, Corcoran began brewing beer on a 1/2 barrel system in 2011 at Corcoran Vineyards. After success onsite in the vineyard “Barn” created a need for greater capacity, Corcoran looked for a new home in Purcellville. When I asked how they settled on an office building next door to an urgent care facility, Kevin answered with a question “Where should a brewery be?”. He continued on, telling me that they investigated several locations but ultimately decided on the location at Hurst and Maple Rd because it had the right space and accessibility for the right price.  Adding “Beer lovers are used to going to industrial parks to find great beer, why wouldn’t they come here?” It appears he was right as they have come en masse.  Corcoran is now humming along on a 10 barrel system!

Corcoran Brewery is located at the intersection of Maple and Hurst Rd, adjacent to Rte 7. With its proximity to the Berlin Turnpike exit off the 7, this brewery would likely be a first stop on your Purcellville area beer trail. Located in the back of a mixed-use medical building, Corcoran has repurposed what looks like an old fermenter as a permanent sign. They also place smaller lawn signs near the road on days they are open. With the benefit of relative privacy in the lower level of their building, Corcoran faces a small park/picnic area on a private offshoot from the W&OD Trail. There is plenty of parking and on a nice night you can catch live entertainment on the expansive outdoor patio area.

The interior decor is in keeping with other area breweries; minimalist in design with a few bar top tables, televisions and a standing bar. Aside from a wall of taps that backs to the walk-in cooler, theres not much that separates the brewing process from the customers. This can be good for those that value being immersed in the experience.  Additionally visitors can buy growlers, t-shirts and other branded merchandise to the left of the bar.

Waiting for a chance to order a flight of 5 to sample, the standing bar is elbow to elbow with eager beer lovers. Corcoran has 12 beers on tap so I have to choose wisely.  Thankfully Trevor the bartender is there to help me sort through the options.

Limited to 5 for the flight tasting I had to include the well recommended LoCo as IPAs are my favorite.  LoCo is one of the best IPAs I’ve had in Virginia, it has the right amount of hops and an even medium flavor throughout. One of the marks of a well crafted IPA is when the beer brings your attention to the complexity of the flavor so completely that your surprised to see what the ABV is. LoCo drinks like a 5 ABV but its actually a 7.2! I requested recommendations from Trevor for the four remaining beers and they were all excellent. The Corktoberfest was a balanced Märzen-style beer with a great finish. Comonwealth was light and drinkable like something you would have on the patio on a summer evening. The Newton Alt is an excellent brown ale with noticeable chocolate notes! The surprise of the bunch for me was Hops the Bunny, a “hoppy” brew with an even finish, I definitely recommend giving this IPA a try when you visit.

Other Beers Offered During The Year

John Champe – English Style Barley Wine ($5.75/ $7.50 ‘ 1$10 / $18) 9.7% ABV, 60 IBU, 9 SRM John Champe, born in Aldie, VA was commissioned by George Washington to capture Benedict Arnold yet only George Washington knew of his double agent status. If captured by the Patriots, he would be punished as a traitor. If discovered by the British, then death would be certain. This beer is an American brewer’s homage to the patriotism and bravery of this fine Virginian pretending to be British. Availability:winter to early spring
Hops: Target, Northdown East Kent Golding, Fuggle.

Golding Padawan Pumpkin – Seasonal Spiced Ale ($5/ $6.25/ $8.75/ $16.50) 6% ABV, 15.3 IBU, 14.2 SRM – In the Jedi religion, a “Padawan” is a pupil who is being trained by a Jedi Knight. Our brewer’s padawan, aka his then five year old son, helped him grow the first pumpkins and crush the grain for the first version of this recipe. We use copious amounts of long neck pumpkins from Great Country Farms (Bluemont, VA), honey from Hamilton, and pumpkin pie spices to create this seasonal favorite. Availability: Fall. Hops: Northern Brewer, Hallertauer

Paeonian Porter – Vanilla-Chocolate Porter ($5 / $6.25/ $9.5/ $17) 6.6% ABV,31 IBU, 40.8 SRM Compared to a stout, the porter has less roasted notes due to a lack of roasted barley. This porter is full of complex flavors from chocolate and black malts, and completed with cocoa and fresh vanilla beans. Hops: Northern Brewer, Fuggles 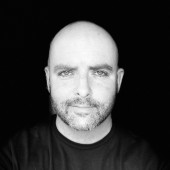 Matt is digital marketer by trade and a Loudoun County beer lover. Matt founded Brewdoun out of a desire to promote the breweries, cideries and distilleries found in this county. Matt resides in Western Loudoun County with his wife and two sons.